The X-wing is, without a doubt, the most iconic starfighter to emerge from Star Wars.  Both in the real world and the Star Wars galaxy, it serves as an icon of the Rebellion, its use at the Battle of Yavin the stuff that legends are made of.  Created by Incom Corporation for the Empire, but brought to the Rebels after the defection of Incom’s entire engineering corps, the X-wing saw service over a span of decades, with numerous variations on the classic design being released to keep it relevant.  In the same vein as all of the other previous Starfighter Week posts, I thought I’d run through the numerous X-wing variants out there.  With just a couple of exceptions, of course, all of these variants exist only in the EU and are now noncanon. 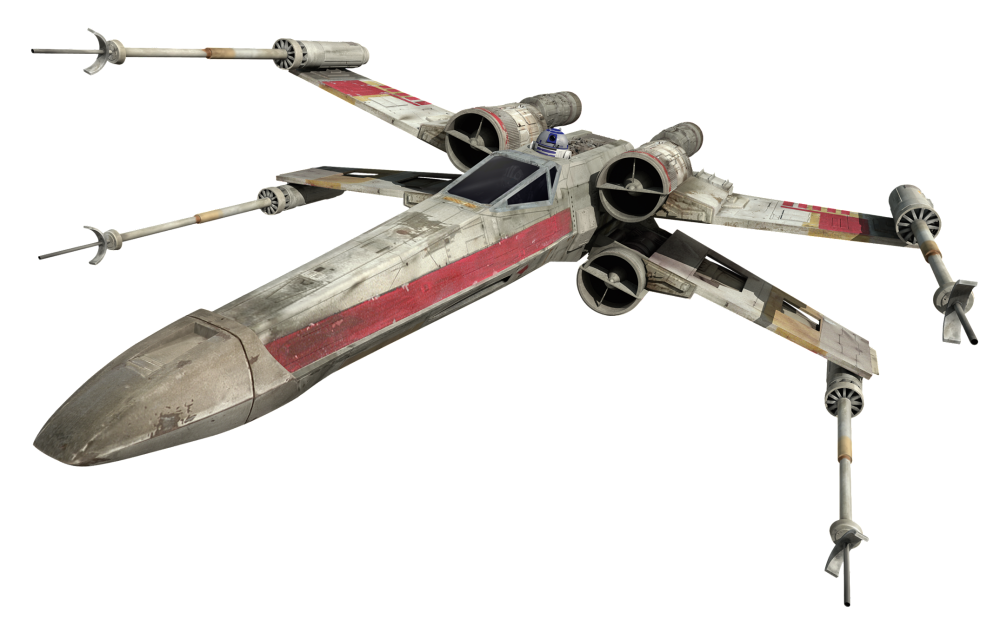 The T-65 X-wing was the base model of the X-wing starfighter.  Taking heavy design cues from the earlier ARC-170 and Z-95 Headhunter, the T-65 outclassed the TIE Fighter in almost every regard.  Featuring shields, a hyperdrive, and two proton torpedo tubes, the success of the T-65 inspired the Empire to create several TIE variants to better counter the T-65.  After the prototypes were taken by the Alliance, mass production started as the X-wing went on to become the premier starfighter of the Rebellion.  Though the base T-65 wasn’t the most used variety of X-wing during the Galactic Civil War, it deserves note for being the starfighter that started it all.

There are several ships with the T-65A designation, all with few appearances and no visual depiction.  The T-65A2 appeared in only The New Jedi Order: The Unifying Force, flown by members of Twin Sun Squadron.   No information was given on what differentiated it from the standard model.  The T-65A3 appeared in a few New Jedi Order novels, flown by Rogue Squadron.  It was described as having better shields, laser cannons, and targeting computer than standard.  The T-65AC4 has no actual appearances, but was described at length in several sourcebooks.  Designed by Incom to allow the X-wing to compete with more advance starfighters, such as the E-wing, the AC4 had many improvements over the standard model.  Much faster than the T-65 (on par with the A-wing, actually), the AC4 was better armored, more heavily armed, and thanks to a new cockpit layout, much easier to fly.

Thr T-65B was the main version of the X-wing used by the Rebellion around the time of the Battle of Yavin.  It was faster than the base T-65.  It featured controls similar to several civilian craft, to aid pilots’ ease of use.  Luke Skywalker flew a T-65B in the Battle of Yavin.

Also known as the Recon-X or Snoopscoot, this variant was designed (obviously) for recon work.  At the cost of its proton torpedo tubes, the Snoopscoot gained a high tech sensor package, several reconnaissance imaging systems, and a HoloNet or Hypercomm relay synched to the hyperdrive, allowing the pilot to immediately begin transmitting live information back to command upon entering realspace.  A vast improvement over the Y-wing Longprobe, the Snoopscoot also had several unique countermeasures in case of capture.  A purge stick carried by the pilot could be inserted in to the cockpit console to clear the system, along with the activation of a charge to destroy the on-board R2-R unit (incidentally, the R2-R was hugely important in the operation of the Recon-X, doing almost more work than the pilot).  The use of the purge stick would also eject a suicide needle that could quickly kill the pilot, if need be.  The ship also had a baradium charge to self-destruct, if the situation called for it.  First appearing in the Black Fleet Crisis novels, the Recon-X has since gone on to have several appearances in comics and novels since then. 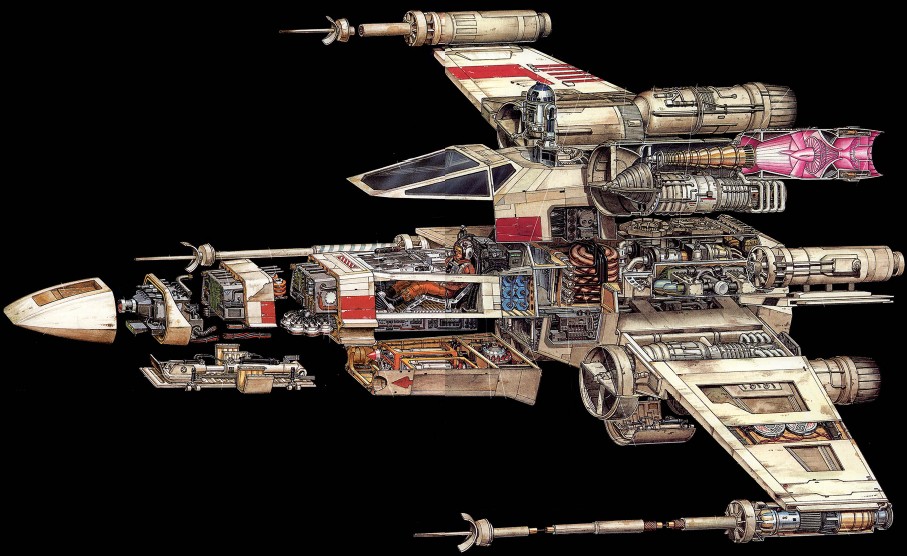 This variant of the X-wing was another one that saw heavy use by the Rebels.  However, as it was a newer model than the T-65B, it never saw as wide a rollout.  I realize that I already included this image in my last Artist Spotlight, but since this is the image Wookieepedia uses, I’ll use it too.  The C-A2 has only three confirmed appearances in the old EU.

UPDATE: So, here’s the deal.  In Pablo Hidalgo’s Rogue One Ultimate Visual Guide, the full model name for the X-wing is given as the T-65C-A2.  So, in canon, it may be that this designation is less a variant of the base X-wing, and really IS the full designation of the X-wing written out (incidentally, this seems like a fair compromise to me: we can indulge in the EU’s habit of giving inordinately long designations for things that don’t need them, while starting to stream the ridiculous number of X-wing variants that existed in it).  Here’s where things get a little dicey though: Wookieepedia still lists the T-65B as the main model used by the Rebellion in this era, and kinda shafts the C-A2 by treating the designation’s appearance in the Visual Guide as applicable to ONLY the specific X-wing shown in the Visual Guide, NOT all X-Wings at Scarif.  Regardless, the T-65C-A2 IS  present at the battle of Scarif, which is nothing to sneeze at.

Introduced about 17 years after the Battle of Endor, this model eliminated the R2 slot to allow for more computer power, increasing the ship’s mobility and the pilot’s options in battle.  Originally ordered by Wedge Antilles, the new computers were discovered to been subjected to Imperial sabotage, rigged to exploded when triggered by an outside detonator.  The sabotage was discovered in time, and nothing of note came of the plot.  The T-65D-A1 featured heavily in its only appearance, The New Rebellion. 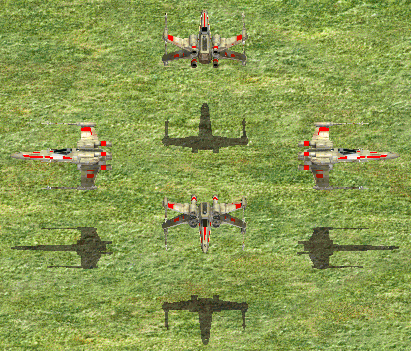 Because, some times, developers don’t look hard enough for pre-existing content, we get stuff like this.  The Advanced X-Wing was created for Galactic Battlegrounds, and is just an upgraded version of the X-Wing for the player to build.  If someone had bothered, they probably could’ve said that the two different Advanceds were meant to be the same ship, but no one did, and now we have two Wookieepedia articles for no good reason.

Known as the “Trainer-X,” this variant was meant for, you guessed it, training.  Featuring a wider fuselage and a cockpit that could fit both a trainee and instructor, the Trainer-X also featured powered-down laser cannons.  Introduced in Shield of Lies (one of the Black Fleet Crisis novels), the Trainer-X has only gotten one subsequent mention.

This variant was never actually given an official designation, likely because it was a one-of-a-kind project that never saw mass production.  Featuring a cockpit that could fit two, along with extra engines and armor, the ship was used by Kir Kanos while bounty hunting under the alias of Kenix Kil.

The T-65XJ was the first in a new series of X-wings.  Introduced shortly before the Yuuzhan Vong War (depicted in the New Jedi Order novels), the T-65XJ had a third torpedo tube, boosting its overall capacity to 9.  It featured better shields, a better targeting computer, better acceleration, and better maneuverability.  Though it didn’t see wide distribution before the Yuuzhan Vong War, its successors would see heavy use during the conflict.

Further improving on the XJ, the XJ3 featured an increased torpedo capacity, a port that could take an R7 astromech droid, improved avionics and agility, and, among other improvements, more powerful lasers that fired a blue beam.  Beyond that, it featured several modifications specifically designed to help counter the weapons and tactics of the Yuuzhan Vong.  Its shields could constantly turn off and turn back on, to avoid being overwhelmed by Vong dovin basals, and stutter fire lasers to more easily overwhelm Vong shields.  By the time of the Dark Nest Crisis, the XJ3 was one of the most commonly used starfighters of the Jedi Order, along with the StealthX.

The XJ5 “ChaseX” featured improvements to the shields and weapons over the XJ3, but never saw as wide usage.  First appearing in the Dark Nest Trilogy, the XJ5 has a few subsequent appearances in later novels.

Appearing only in Legacy of the Force: Betrayal, the XJ6 was used by Luke Skywalker’s Hardpoint Squadron.  No information on what made it different from earlier models was given.

Featuring improvements to, you know it by now, weapons and shielding, the XJ-7 has more appearances than the XJ-6.  First appearing in Legacy of the Force: Bloodlines, and appearing several times more throughout the series, the XJ-7 was known to see use by Rogue Squadron.

Seeing use almost exclusively by Jedi Order, the StealthX was a lightly armored vehicle that was among the most difficult to detect in the galaxy.  Based off of the XJ3, the StealthX was coated with a matte black fiberplast that made it visually hard to see against a field of stars.  It sacrificed the third torpedo tube for equipment to defeat mass detectors, and suffered a shield downgrade to make room for sensor negators.  Burning a special Tibanna isotope for fuel, TibannaX, the engines left no trace to be spotted visually.  As use of the comlink would give away its position, StealthX pilots tended to use the Force to communicate with squadron members.  Similarly, the ship could be spotted when firing proton torpedos, so they were generally replaced with Jedi shadow bombs, which were essentially Force guided proton torpedos that traded propulsion fuel for extra explosives.  It was these sort of modifications that made the StealthX an inferior choice to other XJ series ships for all but Jedi.

Of course, most of these ships are now noncanon, but what is canon is the upcoming T-70 from The Force Awakens.  We know it has split engines, and a few other cosmetic differences, but beyond that we don’t know too much.  Rumor (and some leaked toys) shows Poe Dameron flying a black X-wing at the end of the film, supposedly with stealth capabilities.   Looks like we may get something inspired by the StealthX in the new canon, boys and girls.

UPDATE: We now know more about the T-70, though none of the new information is terribly earth-shattering.  In essence, it is just a more dvance version of the classic T-65, taking advantage of technological improvements to create a more heavily armored and generally superior starfighter.  Originally created for the New Republic Navy, as the New Republic demilitarized it fell out of favor and eventually got phased out for a newer model.  That said, this lead to many T-70s falling into the hands of Leia Organa’s Resistance, where it became their main starfighter.  Poe Dameron used a custom T-70, Black One, that featured sensor-scattering ferrosphere paint.

The T-85 appears in Before the Awakening as the starfighter of choice for Poe Dameron and Rapier Squadron (both part of the New Republic Navy as opposed to the Resistance at this point).  The T-85 is a more advanced version of the T-70, but the specifics of how exactly it is so superior haven’t really been delved into yet.

-The X-wing went on to inspire other ships, such as the X-83 TwinTail that saw use in the Legacy comics, but I tried to keep the focus on the main series of ships, so the TwinTail didn’t make the cut.

-This ends Starfighter Week.  I think this is a little over a week from the first post, but I doubt any of you really mind.

-I’m going to take this opportunity to brag about the time I met Oscar Isaac, who plays Poe Dameron in the upcoming movies.  Below is a picture that the Letterman Show’s Facebook page posted of me taking a selfie with him.  Picture-ception?