As some of my friends may be aware, General Grievous was for a good while my favorite Star Wars character.  To many, this may seem an odd choice.  Grievous didn’t have much to do in Revenge of the Sith, and his appearances in The Clone Wars ranged from decent to pretty awful (seriously, he gets bested by Captain Tarpals in an episode.  Captain goddamn Tarpals).  I’d actually posit that Grievous’s best moments as a character happened before he showed up in Revenge of the Sith, certainly I’d argue he was on a generally downward trajectory by 2008 or so.  Here’s the thing, though: if you were a kid in the era leading up to Revenge of the Sith, like yours truly, Grievous was just the coolest.  He was a complete and utter badass in the time leading up to ROTS, to the point where I’m not sure I could have been wholly satisfied by anything he did in the film.  I’ll do this more in the style of my Thrawn Spotlight than Ventress or Vos, not going through chronologically but jumping around in an order I think you’ll enjoy.  I’m not putting on Revenge of the Sith, because if you’re reading this blog you should have seen it by now.  It’s been out for a decade, c’mon.

I don’t think that there’s any better place to start with Grievous than his first ever appearance.  Chapter 20 of Clone Wars was due to feature the return of Durge, but commands came down from on high to slot in General Grievous instead.  This was the public’s introduction to the good General, and what an introduction it was.  Grievous remains mostly unseen, taunting his Jedi prey, and the suspense builds to a fever pitch until he makes his spectacular entrance.  The fight is one for the ages, and it made for a hell of a cliffhanger for the end of Season 2.  Season 3 picks up immediately afterwards, featuring the also badass ARC Troopers from Season 1 launching a rescue mission.  After skipping a good bit of time, it leads directly into Revenge of the Sith, showcasing Grievous’s capture of Supreme Chancellor Palpatine.  To be frank, this is Grievous at his coolest, and it never really got topped.  It’s still a great place to start, if just to understand why a kid in 2004 would be totally enamored with the character.  Note: Some wonderful person went and cut all of Grievous’s Clone Wars stuff into a two part video.  Part one is there, you should be able to click through to part two. 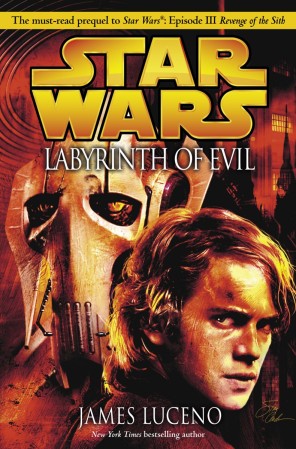 Labyrinth of Evil is one of my very favorite Star Wars books, so of course I have no idea where my copy is.  James Luceno has established himself as an author capable of doing excellent character work, and Labyrinth of Evil is full of great moments, including a few with our favorite cyborg general.  The book doesn’t center around him, but he is enough of a presence to make his place on the cover feel earned.  Here’s one caveat: the book covers a lot of the same time frame that Clone Wars does, and both feature the attack on Coruscant and kidnapping of Palpatine.  The depictions of the event are not exactly the same in both sources, but just go with it.  Despite their differences, both are worth taking a look at.

Visionaries is a tremendously interesting comic.  If you can’t be bothered to read the text on the cover, it’s comprised of 10 different stories (stories is a strong word for a few of the pieces, which are more just visual works) written and drawn by concept artists for ROTS.  It’s sort of like Star Wars Tales, but with a little bit higher pedigree.  The stories are of varying levels of canonocity within the Legends continuity, but the one that we’re particularly interested in for this article was considered canon.  Written by Warren Fu, it’s called “The Eyes of Revolution,” and it features the accident that led to Grievous’s transformation into a cyborg.   It reveals that the event was orchestrated by Dooku to gain him as a pawn, and that he was reluctant even then to accept the cybernetics.  It actually turns Grievous into a somewhat tragic character, which even me at 10 appreciated.  The comic also has the first look at what Grievous looked like before he was a cyborg, which I’ll put in here just so everyone can see it (because, let’s be honest, maybe like 1 of my readers will actually be inspired to go read Visionaries).

Grievous features in the main run of Clone Wars comics a bit (I almost included Volume 7 here, but his appearance is ultimately too brief), though for the most part it’s Dooku, Durge, and Ventress who function as the main villains.  Grievous gets a place to shine here, if you couldn’t tell by the series’s title.  I bought this collection very shortly after it came out, and, to be honest, I was a little disappointed.  It features Grievous heavily (obviously), but it centers on a group of Jedi who decide to launch an assassination attempt on the general (which, coincidentally, is similar to the plot of Dark Disciple, though there the assassination attempt was sanctioned).  The main characters were all created for the comic, and I have the feeling that it may have been a lot more effective if they had used at least some pre-established characters.  What the comic does do a good job of is establishing Grievous as a legitimate threat, giving his name a sense of ominousness that really benefits his character.  It may be jarring to see Grievous go from hating his cybernetics in “The Eyes of Revolution” to embracing them here, but people change and there’s enough of a time difference between them to make the shift in feelings believable (also, Dooku and company tinkered around with his brain when he underwent the transformation, so it’s reasonable to say that that could have had an effect).   It’s worth noting that this series is the first thing I’ve listed in this spotlight that came out after the release of ROTS, and even then its first two issues came out before the movie.  Grievous gets more material, to be sure, but he was never as in the limelight, and certainly never as cool a character, after this period.

This is a little different from everything else here, in that it’s an article from Star Wars Insider, not meant as a story to be consumed.  It’s an excellent piece, giving fuller details on his backstory than seen in “The Eyes of Revolution.”  It covers his full history, and really gives a sense of why the Jedi would have so much fear for him (the article gives him a Jedi kill count approaching 100, and gives details on about 20 in particular).  It’s an article that helps Grievous’s character, and if you just want a basic rundown of the character it’s hard to beat (though it came out back in early 2006, so it may be difficult to find a copy.  I had to dig around for 20 minutes to find mine.  You’re welcome).

The Lair of Grievous

Grievous had a problem in the early seasons of The Clone Wars, and that was that he actually got too much screen time.  The good guys were never gonna lose with any regularity during the show, so whenever they faced Grievous there was a good chance he’d be retreating with his tail between his legs.  This happened so much in the first season that it helped contribute to the creation of the Tactical Droids that would be seen throughout the series: relatively effective commanders who could be more believable and consistently bested.  Grievous features in four general arcs  (1 three episode arc, 1 two episode arc, and 2 standalones) in the first season, and he really only has any great measure of success in this one, and even here he doesn’t pass the test Dooku sets for him.  I’m going to put an excerpt from Matthew Stover’s Revenge of the Sith novelization here:

“Grievous is a monster.

The Separatist Supreme Commander is an abomination of nature, a fusion of flesh and droid-and the droid parts have more compassion than what remains of his alien flesh.  This half-living creature is a slaughterer of billions.  Whole planets have burned at his command.  He is the evil genius of the Confederacy.  The author of their victories.

The author of their atrocities.”

That’s how Grievous was viewed, back in 2005.  With The Clone Wars, he became a semi-competent general who got his plans foiled far too often.  I believe Lucas is on record saying that he envisioned Grievous as someone who was cowardly, very willing to retreat depending on the situation (you see that a bit in ROTS).  I’m not saying Grievous needs to be as insanely powerful as he was in Clone Wars, but the loss of power seen in The Clone Wars really is a shame.  This episode is one of his better appearances, though like I said it isn’t a resounding success for the general.  Grievous also says in the episode, to a caretaker droid, that he actively wanted the changes, somewhat contradicting “The Eyes of Revolution.”  Now, in context, it can be read as him lying defensively to the droid, and that’s how I read it.  I believe Filoni did that very deliberately, so as to try to respect the EU’s version.  Again, I believe it was Lucas who was putting forth the idea that Grievous wanted to be like a Jedi, so he took the modifications.  I really don’t like that direction, so I’m glad Filoni left that element of ambiguity.  Anyway, this is a pretty decent episode, and one of the better ones of the uneven first season.  Give it a look.  Also, starwars.com did webcomics tying in to each episode for the first season.  This episode’s is quite good, and can be seen here.  It’s only 6 pages long, give it a look.

I included this episode in the Ventress spotlight.  It’s a good episode for Grievous, as he actually manages to accomplish what he set out to do, exterminate the Nightsisters.  It doesn’t happen all that often for him in The Clone Wars, so it’s nice to have him get a win.

– As I often say, all my views here are strictly my opinions.  If someone doesn’t like the over the top approach of Clone Wars, and likes the version from The Clone Wars  better, they’re welcome to their opinion; I’ll just never happen to agree with it.

– I probably should have gone with a movie image for the header, but he’s in a spotlight.  It’s perfect, really.

– This post was actually inspired by my good buddy John Katsanakis, who just started up his own blog called Geek, Unchained.  Do me a solid and go take a look.

– Grievous has gotten some really cool collectibles over the years, from maquettes and mini-busts from Gentle Giant, to a full scale bust from Sideshow.  One of the nicest pieces, and a centerpiece in my personal collection, is Sideshow’s Premium Format figure of him.  The Exclusive edition comes with his cape, and if you’re a fan of the General and want to show him some collectible love, I really recommend getting that version.  It’s really quite excellent.